do's and don'ts for the vegan(s) in your life 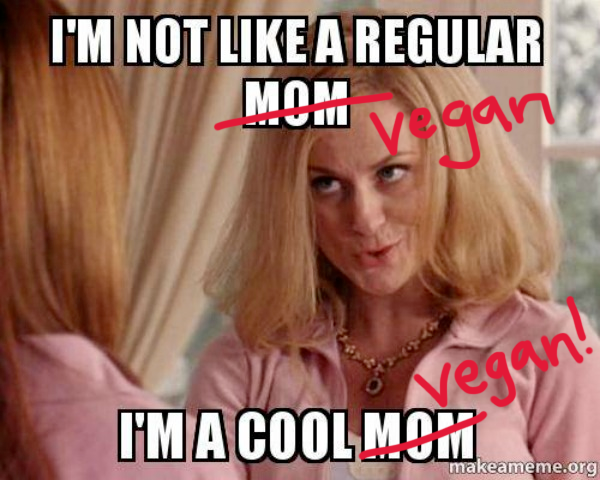 Vegans are in a tough spot.

We're surrounded by utmost depravity, forced to tread water in an animal agribusiness institutionalized slurry that is propped up by billions of government bailouts and roasting our planet alive. We're discouraged (or blocked) if we share videos, descriptions, or even our personal thoughts on the breeding, exploiting, and slaughtering of billions of land animals - and trillions of marine animals - a wholescale horror that continues unabated year after year.

Finding vegan foods and products for our lifestyle, isn't that hard once we get used to it.

What's hard, is being stuck in a goofy and unfair social contract we never consented to.

Because no matter how intelligently OR practically OR scholarly OR creatively OR passionately OR logically OR radically OR stylishly OR conversationally OR hilariously we speak up, if we say one word about our veganism we're usually told to shut up - or made fun of, or talked over - tactics which if you haven't figured it out, are attempts to get us to shut up.

Well I'm a Buddhist and I also can't shut the hell up about stuff I care about, so I like to write pieces that are helpful - and pragmatic.

HERE is my quick guide to getting along with vegans.

Because we're here to stay (for however long we get to share this planet).

Oh! and, more thing before my Do's and Don'ts:

Veganism isn't a diet, but most of these recommendations will be about food and eating.

Quick reminder that vegans not only refrain from eating animal flesh and secretions - we eschew, as much as possible and practicable - ANY consumption of sentient beings and their bodies - as in leather, beeswax, wool, silk (very very relevant to my line of work, by the way) as well as exploitation of their bodies - like unethical exploitation of human animals (you know: people), horse-riding, and zoos.

But a lot of that stuff doesn't come up in day-to-day life with our friends.

Do's and Don'ts For Doing Right By Your Vegan Friends

DON'T order for us at restaurants, or "explain" us to the server.
(Assuming the vegans in your life are adults), we don't need your help. If we're at a restaurant: I'm a big boy, I can look at the menu, ask questions, figure it out myself. I don't need you interfering. Promise!

DON'T suggest a restaurant and then say, "Oh... but I don't know if they have vegan options."
Of course you don't. But I probably do. I've got like eight apps on my phone. I've probably already looked it up. Again: I can take care of myself.

If you want to be the real MVP, DO let us pick the restaurant.
If we're getting together to eat I appreciate if you let me pick the restaurant (or select a few for you to choose from). But honestly, that's (usually) not necessary. Sometimes it's just fries and a side salad then afterwards I grab the peanut butter sandwich I packed in my bag.

(Please note: there are some vegans who WON'T eat at a non-vegan restaurant or sit at a table with animal flesh and secretions. But those vegans will likely let you know about that - you don't have to proactively ask.)

DON'T - when ordering or eating food - stop and say, "Is it okay if I eat this?"
You are being extra ridiculous and putting us in a terrible social position. Is your vegan friend really going to say, "Actually Barry thanks. I'd like you to send that food back right now, and get the pineapple curry instead."

You might think you're being kind but you're not. You're actually pressuring me - usually in front of other people - to be the Cool Vegan (TM). What you're really REALLY trying to do is mollify your conscience to make sure I never ever ever say anything challenging to make you think about your food choices.

That is really, really uncool. Your conscience is not MY business. Don't you put that hate on me, Ricky Bobby! Not my shit.

DON'T compare my veganism to your dietary choices, allergies, or restrictions.
Just: stop. Veganism is a social and planetary justice movement. It has nothing to do with sensitivities, so-called "clean eating", allergies, etc etc. There are plenty of vegans with food allergies and sensitivities - and there are (sadly) orthorexic vegans (just like there are orthorexic non-vegans). These are entirely separate issues. Don't lump them together because you want to ignore our ethical foundations.

DON'T share a recipe then "helpfully" suggest ways to veganize it.
What's that Ron Swanson meme? "I know more than you."? It is incredibly unlikely that your, "hmm I don't know ... you could use, um maybe coconut milk in this creamy soup?" can compete with my skillset and concomitant pantry loaded with four different kinds of coconut milk, oat milk, Ripple half and half, cashew cream, soy milk powder - need I go on?

I really, really don't need your veganizing "help". (Maybe you need mine!)

DO try to cook us vegan meals!
And when you do, please don't grill us about ingredients. If you have to ask us a question, please make sure it's in good faith and only after you've done your own research. Go ask a vegan group for suggestions rather than making your vegan friend feel like a weirdo or hard to please. You'll learn something new - probably lots of things!

DON'T try to be perfect when you cook for us.
Make an effort, but don't stress. Really! The first vegan meal a friend cooked for my family after we went vegan, she made a (canned, I believe) vegan chili and cut up soft tofu chunks and threw them in there. You know what? It wasn't high cuisine but it was just fine - and I was touched she took that care because I happened to know that entertaining others wasn't easy for her.

DO consider going vegan, yourself!
This is the most amazing, wonderful thing you could do. Go vegan, then deepen your vegan education (TRUST me I have plenty of sites, groups, books to recommend)! Veganism is for me an absolute joy that springboarded me into even more energy for my passions, and for my other social justice work.

But I promise you: EVEN MORE WORK is waiting for us. Veganism is just the beginning. We can do it!

I know that many of you DO respect us and I know exactly why so many of you don't want to say it.

Because yes it's possible your vegan friend will say something a bit challenging like, 'If you respect us, why don't you commit to veganism?"

But honestly? So what?

You'll live through that discomfort, if it happens.

We need to hear that we matter. And if you think ANY person's ethical commitments matter, then ours do too.

Thanks for hearing me out on this.